Living in a post-industrial city not exactly renowned for its abundance of wildlife, getting a nature fix usually involves hopping in the car to reach reserves which have a reputation for attracting my target species of the month. With it getting into mid-March I had one thing in mind: the sprightly antics of the mad-March hare, a concept immortalised by writer’s such as Lewis Carroll when Alice, in Wonderland, hypothesises that the March hare won’t be ‘raving mad’ in May, ‘at least not so mad as it was in March.’

Alas, with the government’s sudden announcement of a nationwide lockdown scuppering my plans to catch these elusive mammals springing into mating mode, it was time to hang up the car keys and embrace the less romantic wilds around my suburban locality.

Imagine my shock then, when a spontaneous route into the countryside on my daily exercise romp soon found me frozen-browed on the edge of a field as a pair of black-tipped, upright ears bounded towards me, before vanishing like a wizard’s act into the hedgerow. A magical experience! And I’d walked 15 minutes from my house on the edge of a city populated with around 326,000 people.

Was my sighting a freak one, or had I hit on an unlikely hare hot-spot on the fringes of suburbia? Being within walking distance meant that it was only too tempting to return to find out, only this time, shouldering my camera, and this time spotting not 1, but 3 hares! Could this mean I was even in with a chance of witnessing the mad March mating rituals after all?

I’ve never been a huge believer in the realm of the supernatural, but I met the peak of the madness the morning after the first night of the April full moon, otherwise known as the hare moon would you believe? This quickly became apparent when I arrived at my hare spot at dawn to notice a lithe figure leaping about for joy. Mr Ballerina was clearly out to impress, and there she was, the object of his desires paying close attention to her impressor, and there they were at it like, well…hares, all between dizzying bouts of chasing and fist spars feisty enough to keep Sugar Ray Leonard on his toes.

Just when it seemed things couldn’t get even more unreal, the pair decided to take a break from their perks to approach their novel spectator. They got so close I could have counted the number of whiskers flaring from their mop padded noses, and it suddenly felt like the observer had become the observed as their bulbous eyes glared as if to ask the gangly frame in the hedge clutching a completely conspicuous camera: who is the mad one here?

I guess this was a fair judgement, but that didn’t stop me gaining an extra spring in my step on my walk home. 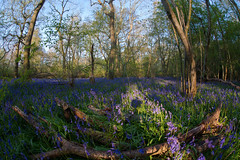 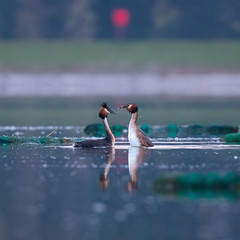 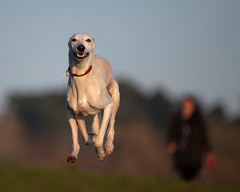 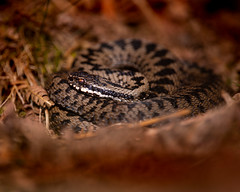